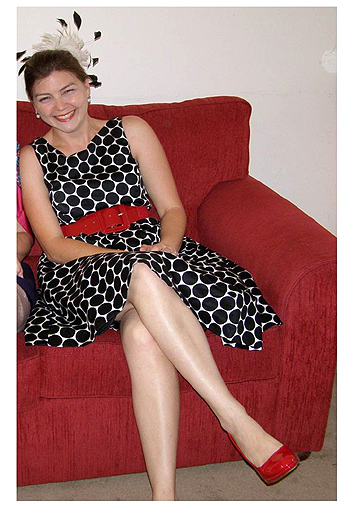 I was born and live in Australia. I was presented with severe hypoglycemia at birth, and even with a glucose drip, my blood sugar would rarely rise about 2.0mmol (36 mg/dl). I was treated with diazoxide and chlorothiazide, and would not feed. Mum said that it was absolutely terrible – I would scream, arch my back and bring up any little bit of milk that mum had managed to feed me. I first went to surgery at 28 days old. During the first lot of surgery, the surgeons removed what they then thought was an adenoma in the tail of the pancreas. Two days after the surgery however, my blood sugars fell again, and were just as bad as before surgery. I was taken to theatre again and had a 95% pancreatectomy when I was a month old. I was put on diazoxide again as my blood sugars were still low, except that this time I had severe side effects and ended up in intensive care with severe fluid retention and an electrolyte imbalance. That was the end of diazoxide for me!!

I was still in hospital on a drip, cornstarch, a low leucine (low protein) high carbohydrate diet and frequent feeds by nasogastric tube when required. I still wouldn’t eat and was still vomiting frequently. At six months of age the blood sugars were out of control again and I had my third pancreatectomy. This time, my blood sugar was high after surgery and I was on insulin during the days following the surgery. The blood sugars came down gradually with the insulin and the insulin was stopped. After a month my blood sugars were in the normal range and I ate really well. Six weeks later, I was getting the occasional low blood sugar and the feeding problems were returning. Frequent feeds around the clock were back on the agenda again, as was the cornstarch and the low leucine, high carbohydrate diet. Eight months later (I was 14 months old at the time), my blood sugars were again very hard to manage and so I went off to surgery again for the fourth pancreatectomy (another 95 % of the remainder). This time my blood sugars were high after surgery and everyone knew that insulin was going to become a part of my life.

It goes without saying that I can’t remember what happened to me when I was a baby, at the time of my surgery. However, I still do have quite an impressive scar, which I am pleased to say is still a longer scar than my brother (who broke his arm when he was 14 years old) has  to show off! I can’t remember much from primary school, except that mum used to come and do blood sugar tests at lunchtime and used to worry that I would have a hypo at school.

High school was a little bit better, with my starting to take over the control of my diabetes from my parents. It was about this time (about 7 years ago) that I started taking four insulin injections a day (which I used to give to myself at school). It is a pain to have to do it !!!, but it is just something that I have to do. It was difficult to manage at school but I got on quite well with the school nurse and was comfortable speaking to her about my diabetes and blood sugars if I was unsure of what to do at any time. However, I did try to lead a relatively normal life; I played a lot of sports at school which included cricket and rock climbing. I also studied fairly hard (this included trying to speak French as a second language for 5 years) and after this I was accepted into the university course that I wanted.

These days…I am about to start my second year of Property Economics and I work part time for Colliers International. I live at home with a horse, a cat and my two dogs (and a brother, mother and father). Our house is always full of friends and there is hardly ever only my family at home, so I lead a fairly busy life. I have plenty of friends and most of them accept my diabetes as part of me. I am still on four injections a day and I take my insulin to work and to university as well as when I go out with friends (my close friends always look out for me when I am out with them and they are always concerned what my blood sugar is and if I am feeling alright).  As for future…

Well..I would like a career in the property industry after I finish my university degree and see what happens after that.