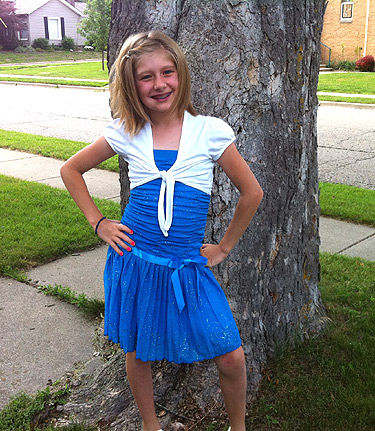 My name is Dina, mother to Ashlee, now 11 years old. We are from Imlay City, Michigan. Ashlee was born in 2000 and has been diagnosed with Hyperinsulinism-Hyperammonemia (HI-HA). She is treated with Diazoxide and a protein restricted diet in our endeavors to maintain her blood sugar levels (BSL). She’s currently on a very high dose of Diazoxide. Here is Ashlee’s story…

Ashlee was born full term (39.5 weeks) and seemed healthy upon delivery. She was very, very small for gestational age weighing in at a tiny 5lbs and 3 oz. This should have been our first indicator that perhaps something wasn’t quite right. Ashlee was very vocal from the get go and cried a lot. She did not take well to breast feeding and after a few weeks of trying exclusively to breast feed, I did begin to bottle feed as well, breast feeding when I could and when she would, which wasn’t very often. We weren’t even having luck with bottle feeding as we spent months searching for bottles she would actually take. She would take only 2 ounces of food at a time and we were convinced it was the bottles. However, now we realize, maybe not. Once we got the feeding okay (2 ounces every 2 hours) we dealt with some sleeping and crying issues. We took her from pediatricians to emergency rooms, telling them how she cried all the time, was very “active” (her hands and feet would move in constant little circles) and wasn’t a good sleeper. We were sent home repeatedly with the diagnosis of colic. We never quite agreed with this as mother’s intuition told me that there was something more.

At about 8 months she was eating baby food, although not much, she never did become a good eater. One day, when she was 9 months old, she woke up from a nap screaming, which was not normal for her. I went in, picked her up, and she was as limp as a rag doll. I watched her for a second and realized she was, in fact, having a seizure. She was limp, her eyes were rolling, and she was whimpering. I grabbed my coat and a bottle and ran out the door. Not sure where I was going, I headed to the closest Doctor’s office and ran in with her yelling, “please help my baby.” They took her in, calmed us all down and examined Ashlee. She seemed upset, yet didn’t have signs consistent with a seizure. I went home and called her pediatrician, we talked and agreed next time, to take her to ER. About a month went by and all seemed okay, until it happened again one day. Although my husband believed me about the previous incident, I think a few people doubted what I’d said I’d seen. Well, this time, my husband was there and we drove right to the ER. They looked at her, said she looked fine (she was calmer and more normal by the time we got there) and sent us home. This happened on 2 other occasions, each time we got sent home. By now, the seizures were happening daily and I could barely function. I didn’t know what was wrong with my baby, but I knew it wasn’t normal.

Then, one day, in the ER, she began to have a seizure and I ran out, grabbed a Doctor and made him watch it. They immediately drew blood and her sugar levels were under 30. They put her on a dextrose drip and transferred us to a bigger and better equipped hospital. Once there, all that was done, was put her on a drip and stabilize her, and then they sent us home, despite my protests. We were back the next day. At this time, they did every test on her from epilepsy to reflux and nothing came back positive. We were in there for 3 weeks and finally I asked them to take her off her drip and we would see what happened. We did and boy did they see. Her routine consisted of waking up, breakfast, seizing, sleeping, waking up, eating, seizing, and on and on. About 10 seizures a day was the norm during this time. I sat helpless, praying and begging that someone, anyone, would recognize what was wrong with my baby and help her. I just held her as much as I could, reassured her, sang to her, and cried for her. I thought I was losing my child. I honestly didn’t expect her to live; after all, no one could tell me what was wrong with her or what was happening to her. The last seizure Ashlee had was in that hospital. The Dr. was in observing her and she began to have a seizure; he watched her for about 4 minutes as I was frantically trying to get her to eat or drink something. Suddenly, she became unresponsive and they administered glucagon, which she responded to. At this time, they put her on Diazoxide and she was admitted to NICU. They transferred her to yet another hospital for more tests. Well, this hospital didn’t seem to think this was necessary and wanted to do nothing but try to take Ashlee off the meds that were keeping her stable.

During this time, my husband and I were online doing our own research, as we weren’t happy with the lack of progress in any of the hospitals. During our research we found a lot of information on hyperinsulinism, which we thought sounded a lot like what Ashlee had. We started a journal of everything that happened; every time Ashlee ate, drank, went to the bathroom, every blood sugar taken, etc. This journal helped us see that Ashlee seemed to have seizures after she had eaten. The hospitals literally thought we were crazy and sent us home. Ashlee, being on a very low dose of Diazoxide, was not having seizures, but was far from stable.

With all the research we were doing, the Children’s Hospital of Philadelphia came up many, many times in association with blood sugar diseases. After finding the yahoo support group on hyperinsulinism and posting my story, many directed me to CHOP. I contacted them immediately and the nurse practitioner listened to every last detail of my story, even though it went on till after 6pm, surely when she should have gone home. We scheduled a visit there to have Ashlee evaluated by Dr. Stanley and his Endocrine team. This was their specialty, they were the experts. We went to Philadelphia fully expecting surgery and a concrete diagnosis. Upon testing, however, her results went a different way. Ashlee ended up having HIHA, which is a form of HI in which the child is leucine sensitive. Leucine is an amino acid in protein foods. Ashlee’s HI was triggered not just automatically, but also whenever she would eat a protein food. Her reaction was remarkable, with sugars going from 90 to 35 in a matter of 15 minutes after eating protein. This would explain why, in our journals at home, we noticed that her worse moments came directly after eating. This “theory” of ours that the doctors in Michigan thought was crazy, was in fact, something very important.

Our hopes of surgery and a cure were whisked from under us as we learned that surgery cannot help children with HIHA. Ashlee’s condition was pretty severe, requiring us to increase her meds to the highest possible amount and restrict all snacks and meals to equal a very low 30 grams of protein a day. As you can imagine, pasta and veggies took this amount and meat was not a part of her diet. She began to get used to it, though, and after increasing her meds, we noticed an amazing turn around in Ashlee. She was now 18 months. She began walking and talking and smiling, playing and calming down, in general. She was a different baby than we’d ever seen before. We would sometimes just sit back, watch her and cry; this is what it’s like (she is our first together). In a series of follow-ups, we added some protein back into her diet because the Diazoxide works so well. We spent the next 1.5 years looking for a good endocrinologist in Michigan, which we now have. We have our bad days with low sugars for no apparent reason, but we work through them and try to remain calm. To this day, CHOP and its members in the Endocrine Department, are our angels. We wouldn’t be at this point without them.

In retrospect, I see that in her first 9 months signs weren’t detected; how miserable she must have been. Wanting to help her, I’d feed her (eggs, peanut butter, anything) not knowing I was hurting her more. Knowing what I know now, I would have treated her in a different manner. I’ve come to realize that I am my child’s greatest advocate and taking all other things into consideration, I will do whatever and all I can do keep her healthy. I would often see other children her age, bouncing around and so happy and go home with Ashlee and cry, wondering why she wasn’t happy or bouncing around. I blamed myself, blamed my husband, blamed doctors and hospitals, blamed everyone. I now blame the disease. It’s rare, and doctors are still learning about it every day.

At 11 years old, we continue to have HI-HA be a normal part of our day. We wake, check sugars, eat, eat more if sugars are low, prepare lunches based on diet requirements, pack extra juices and snacks depending on her after school activities, check sugars after lunch at school, come home, have dinner, check, sugars again if she is symptomatic or not feeling well, take meds, head to bed only to get up again and start all over. In some ways, things are so much easier; Ashlee can verbalize how she feels and she recognizes when her body is not feeling right. In other ways, things are a challenge. Puberty and hormones have not made dealing with HI-HA any easier. We experience weekly lows which are worrisome. However, we know it is all part of what we will always deal with and what Ashlee will always deal with. We are affected more than ever by the excessive hair growth from the Diazoxide due to her age. We feel like Ashlee has been taught to be oversensitive to how she feels. We have spent 11 years asking “how do you feel?” Now, Ashlee gets a bit of a sore stomach and you would think she had a full blown flu. She is sensitive to her body and how it feels so now we try to teach her the fine line. What is not well and what is the stuff we all deal with on a day to day basis.

One thing I have said before and will say again is that I truly feel Ashlee has become a kind, caring, empathetic young lady. She can be empathetic towards students who have some special needs or who she sees being made fun of. She can put herself in their position. For this reason, you will never meet a kinder, sweeter young lady. Her optimism is contagious and her happiness is what makes us smile. She has been learning piano, loves singing, and recently made the cheerleading team at school. She is happy and while we deal with our challenges, we continue to work to rise above them.