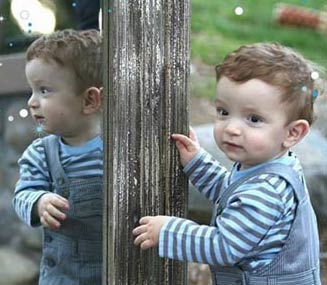 Dante, the biggest of his triplet siblings at birth in Nov. 2014, weighed 2 pounds, 12. His brother Austin, was born at 2-7, and sister Tavianna, at 1-10. Dante was the first to leave the NICU, going home at 10 weeks old. He was gaining weight and doing well at home when, on April 24 he turned bright red, then blue, holding his breath and staring. He then took a couple deep breaths and his color came back. A blood test in the Emergency Room showed his blood glucose level at a dangerously low 35 mg/dL. Dante was immediately admitted and his lows were managed with IV dextrose while doctors searched for the cause. High insulin levels pointed to hyperinsulinism, and he was treated with diazoxide, octreotide and dextrose via a nasogastric (NG) tube, keeping his blood sugar steadily in the mid-60s. Doctors said he was ready to be discharged. By then, Kija’s own research showed her “CHOP was THE place for HI,” even though it was across the country from their San Diego home. She spoke with HI nurse who told her that CHOP’s protocols didn’t indicate discharge with sugar levels in the mid-60s. Then Dante threw up, dislodging the NG tube. Within 45 minutes, his blood level dropped to 37. “That’s when I told the doctor, ‘We need to go to CHOP.’” Kija says. “I wanted to know I brought Dante to the best place with the best doctors with the best knowledge.”

They came to Philadelphia via medical flight on May 22. Genetics testing indicated Dante’s HI may be focal (although it wasn’t the typical gene mutation), and an 18F-DOPA PET scan showed the whole tail of Dante’s pancreas “lit up like a Christmas tree,” Kija says. “We were joyous thinking it was focal disease and he could be cured by surgery.” But it wasn’t so simple. Surgeon-in-Chief N. Scott Adzick, warned it didn’t look like a typical focal lesion; the tail was too bulbous. “Dr. Adzick is the one who called it,” Kija says. In about 5 percent of PET scans, what appears to be focal turns out to be diffuse disease. Pathology didn’t show focal disease. Dr. Adzick ended up removing 40 percent of Dante’s pancreas.

Post-surgery, Dante still had low glucose. But the family and doctors decided on medical management vs. a second surgery for a near-total pancreatectomy. “With the tail, and its abnormal concentration of beta cells gone, we’re hoping he’ll be less effected by HI and even outgrow it,” Kija says. The original treatment plan was to give Dante octreotide during the day and continuous dextrose via a g-tube at night. But another twist presented itself: Octreotide made him vomit. So the plan was adjusted to continuous dextrose infusion along with tube feedings and bolus dextrose if needed. Kija was trained in how to manage the pumps, and they went home after a month at CHOP. While medically managing Dante’s HI is challenging — especially with two other babies around — it’s allowed Dante to maintain a safe sugar level and keep 60 percent of his pancreas, which could mean he won’t eventually develop diabetes and the life-long complications that come with it. “If we have to do something difficult for a few years for him to avoid diabetes, I’ll do it,” Kija says.

Since November, Dante has been able to tolerate two shots of octreotide a day, allowing him an eight hour window without all his tubes. “That lets him play with his siblings without us worrying about the cords getting pulled,” Kija says. “He is just taking his first steps.” Dante has had a couple of hospitalizations when he had a cold or stomach bug, which seems to compromise his ability to maintain his sugar levels. “He’s still a really happy baby — even when I check his blood 10 time a day,” Kija says. “He smiles all the time.”