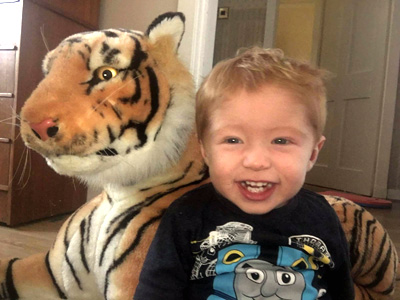 Declan was born in the emergency section 4 weeks premature – due to me developing sepsis, his heart rate spiked to 192 bpm, so the decision was made to get him delivered.

He spent 2 days in the neonatal unit due to having to get antibiotics for the infection he had. He had low blood sugars when he was born but doctors weren’t concerned and didn’t think any further treatment would be needed. As his levels rose before leaving the hospital, we got home to his two sisters and lived a healthy first year with no problems. His dad and I had taken him on a drive in the car one day when all of a sudden Declan awoke from his nap and had a seizure. He became unresponsive and his lips started turning blue – we thought he was dying, as he was a healthy one year old with no medical conditions, so when this happened we panicked, we called a ambulance and they checked his sugar levels and they were really low – below 2.0.

They gave him glucogel and the Gluco injection and we rode in the back of the ambulance to the hospital where he was put on fluid drips. It took around two weeks of a hospital stay for him to be diagnosed with hyperinsulinism. We were shown everything to do at home and was let home two days later.

We were back as Declan’s levels kept falling so he was back on fluids on a drip and regular monitoring for another week. They decided to start him on a stronger dose of diazoxide along with chlorothaizde, as his levels improved but still had days of falling. He was given yet another higher dose of diazoxide, and we had regular appointments with his consultant to see how he was doing, but we soon realized the diazoxide was causing dramatic weight loss. He was beginning to look so weak and frail and because of this, it was starting to affect his muscles, so we put him on 2 hour feeds to try and gain his weight back. So far he’s doing well, he’s on 1.5 ml of diazoxide daily along with 1ml of chlorothazide daily. We check his levels every 3/4 hrs just to make sure they are staying at a safe level.

His sisters have been great – they are 10 and 3 and know that their little brother is poorly and takes up a lot of mummy’s time, but they love to help.

We are awaiting another appointment to see his consultant to see how Declan has progressed. Thankfully he hasn’t had another seizure and we have managed to keep on top of his levels, but nonetheless he is an amazing little boy who takes it all in his stride. He’s been poked and prodded all his life and just smiles and lets the nurses do what they need to, he’s such a brave little boy and that fills my heart with so much love.