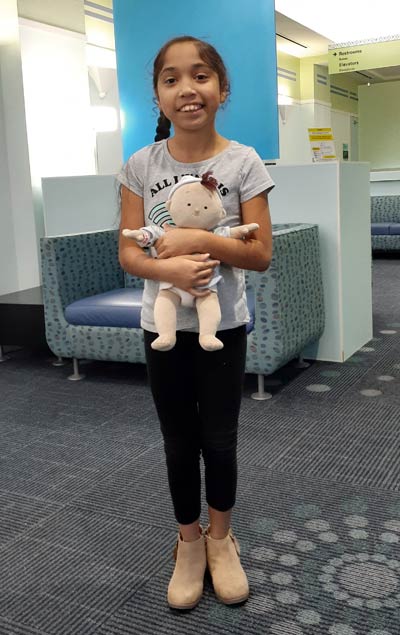 On Tuesday December 2nd, 2008, I was scheduled for inducement. I had worked my entire pregnancy and had the best pregnancy still till this day – and I have 4 kids total. I was hooked up and given Pitocin and had my epidural done. The nurse even joked about how big the baby was going to be, but the nurse was way off. I was not prepared for this at all. It was time to push, and after 4 pushes and a whole nurse on top to help, she was finally here. Gracie was 9 lbs. 1oz of fluffy cuteness.

They noted some sluggishness on her left side, and she was found to have a broken left clavicle. The nursery nurse mentioned in a non-emergent way, or casually, that Gracie was having some glucose issues but as long as she ate, she would be fine. I’m guessing they thought she had transitional diabetes that usually corrects once baby’s system kicks in gear. When Gracie was in the room with me, she would scream for her bottle. This cry gave me anxiety to hurry up and make her a bottle and feed her immediately! As a newborn, she was downing 4 oz. I remember when her brother was born, he would maybe eat half an ounce of formula. The nurses took note and said that I shouldn’t feed her so much since she’s already a big girl and she would end up gaining too much weight. I tried on the following feed to just do 1 bottle, but she cried so much – and loudly. Even though I mentioned these characteristics, I was dismissed. “It’s normal, she’s fine, just make sure she eats but not too much” was what I was told. We were discharged and I felt somewhat confident that she would be ok.

Boy was I wrong. The same day we were discharged, Gracie stopped eating as much. That night she would wake up sweating and would pass out again before I could feed her. I tried and tried, and she just would not eat. It was such a long, exhausting anxiety-riddled night. Morning came and the hospital called to do a check-in to see how our first night went. Even after telling them my concerns I was still met with, “Just make sure she eats and if you have any concerns reach out to your pediatrician.”

Frustrated, I just accepted that she would just be a tough baby. But that day, she stopped breathing, and it scared me so much. All I could think was to pat her back roughly. “She must be choking, a crying baby is a breathing baby,” is all I kept saying in my head. I rushed her to the emergency room, and they took me to triage where she began this shuddering breathing – almost like she was trying to catch her breath.

These doctors and nurses made me feel like I was a scared incompetent mom. I ran through my concerns again but was told it was normal and chest X-rays were clear. Sent home with a sick kid, I knew in my gut something was wrong. That whole day was a nightmare. I sat there watching her turn purple and pink from lack of oxygen, to recovering her oxygen over and over. Then she made these faces that made me think she was in pain. It was her first seizure but at the time I had no idea what that looked like.

Round two: rushing Gracie to the emergency center – the little bit of fever and lethargy is what saved her. They did a spinal tap and basically went down the line with tests to see what they could find. The nurse walked into the room and said Gracie’s glucose level was at a 5. They didn’t notice the erratic breathing. Nurses pushed in the glucose in her IV and it took us 5 minutes to go to her hospital room on the pediatric floor. Literally 5 minutes and her glucose went from 56 and rising to a 19 upstairs. When they hooked Gracie up to the oxygen meter the nurse couldn’t figure out why it kept going off. It took me being super rude and yelling for them to just stop and watch her. That’s when they finally noticed her breathing was off and on. Before I knew it, they hooked her to oxygen, and I had a room full of nurses and doctors in white coats. I was terrified and crying. It was so much in such a short time.

We were taken to PICU (Pediatric Intensive Care Unit) where we found out she had BOTH her clavicles broken among the other issues – and that’s where our journey began.

Within two weeks, Gracie had her first pancreatectomy, and in January 2009, Gracie had her 2nd pancreatectomy. She was placed on Octreotide and phenobarbital for seizures. In September 2009, we were flown to Cook Children’s and we met Dr. Paul Thornton, where he basically changed her quality of life. We had a G-button placed and meds revised and blood draw for genetics where we were confirmed to have Congenital Hyperinsulinism – ABCC8 double mutation. Since then we have been in the care of Dr. Paul Thornton, and he has helped Gracie tremendously. Currently, Gracie is in transition to be diabetic and her G-button was removed in 2015. She has been eating solely by mouth since then.

We have come a long way, and Gracie is a warrior to have endured so much in her first few years of her life. She’s now this crazy sassy kid with this bubbly bold personality. That’s her story, her journey, and I thank God we made it.