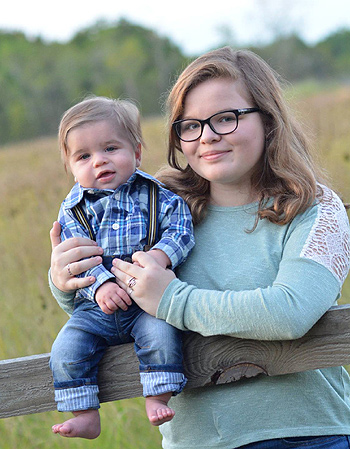 A 13 year age gap exists between our daughter, Faith, and our son, Jackson. People always assume it was an “accident” but it wasn’t. His entrance into this world had been prayed for and hoped for, for quite some time. After a pregnancy loss and being told I was entering “advanced maternal age,” this pregnancy was different than that of our daughter. We did extensive genetic testing prior to conceiving to find an explanation for the previous loss and to see if there were any concerns going forward. Everything came back okay. I saw a maternal fetal specialist alongside an OBGYN, and did regular ultrasounds and monitoring. With so many eyes on us, I felt confident we had nothing to worry about. I was diagnosed with gestational diabetes which had to be controlled with insulin but with medication and a strict diet, I never had a blood glucose level that was too high or too low. Out of caution, Jackson was born via c-section at 38 weeks.

Jackson was born 7 lbs 5 oz. Upon birth he was shown to me and quickly whisked off to the NICU. He had fluid in his lungs and he had low blood sugar. My doctors told me low blood sugar was common in babies born to moms with GD so I wasn’t surprised. His breathing was the main concern to everyone. After six days he was released. We were told his hypoglycemia resolved in the first few days.

We spent the next four months with what seemed to be a very normal healthy baby but with an incredible temper when it was time to eat. Family and friends even joked about our “hangry” baby. He ate like clockwork, every three hours. When he was hungry, everyone knew it. A few weeks into daycare, Jackson contracted a stomach virus. From that point on our lives were never the same. Jackson’s health quickly declined. Our warm bubbly baby was now cold to the touch, with a blank stare and zero personality.

The first night/early morning the symptoms presented, we rushed Jackson to the emergency room. We told the physician that he was cold to the touch, not eating, not blinking, not urinating for several hours, and going limp. The doctor told us make him eat while we were there. So we did. A short time later, his color returned and he seemed to be okay. The doctor lighthearted implied that it had been awhile since we had a baby and we were just over anxious. He said all of his symptoms suggested teething difficulties and that all was well. No real exam. No blood work. Nothing. We were sent home.

I spent the next few days forcing Jackson to eat because he didn’t cry for food anymore. He’d present with the same issues again and again, I’d feed him, he’d get better, then over the next few hours he’d decline. The first doctor really made me question my judgement. Was I looking for something that wasn’t there? A few days passed and my concern grew more. The final straw was one morning Jackson again had a blank stare in his eyes, wouldn’t blink, his body was cold, and his hand was twitching. I thought he was having a seizure. This time we went to the Texas Children’s Hospital (TCH) emergency room.

Because of the suspected seizures, Jackson was taken straight back and under the evaluation of the pediatric neurology team. One of the first things done was blood work. About 20 minutes later our nurse, literally, came running into the room with a glucometer in her hand. She pricked his heel and took the sample. A few seconds later she looked at me, “21, his blood sugar is 21.” She grabbed the phone on the wall, went on the intercom, and before I knew it, the room was filled with doctors and nurses. I was terrified. They administered an emergency bolus of dextrose. He continued to drop in the 20s and 30s. Once he was on a continuous dextrose drip, he finally became stable.

The first few days were a little of a blur and when I think back, I can mostly recall the confusion and fear. Jackson’s PCU room had an entire wall made of white board material. There were so many words and assumptions going around that my head was spinning. I asked our nurse for a dry erase marker and I filled the wall with everything in my head. I kept writing until the day we were released. On day three we met Dr. David Paul, Attending Endocrinologist with Baylor College of Medicine / Texas Children’s Hospital. For the rest of my life, I will be grateful for this man. Dr. Paul has been treating HI for 17 years. Reading so many stories and talking to other parents, I know how lucky we are to have ended up at TCH and have Dr. Paul treat Jackson. We had a diagnoses in 3-4 days. Jackson spent nearly three weeks at TCH. Responsive to Diazoxide, we went home and he’s been mostly stable. We check his blood sugar every three hours, do monthly echos to stay ahead of any complications with his medication, stay in contact with his specialists, and remain full of HI hopes for his future.

One of the biggest lessons I’ve learned from all of this is: trust your instinct. I have so much respect for health professionals. The expertise and compassion shown to us has been incredible, but doctors are human, and they make mistakes. I encourage any parent to seek a second opinion and third too, if needed. Doctors may see hundreds of kids on a regular basis but you see your child more than anyone else. You know them best.

The risk of brain damage is high with these children. We are grateful that the MRI was clear of an obvious damage but we know that learning disabilities and delays are possible. As a mom, all you want is for your children to be healthy and happy. I look back on those few days at home, after being turned away from the first hospital, with much regret. A simple and inexpensive blood glucose check could have saved him from days of hypoglycemia. Blood glucose checks are the fastest and cheapest tests available. Who knows how the course of Jackson’s life could have changed if the first hospital would have tested. In my opinion, blood glucose checks should be part of the standard testing protocol in emergency rooms when dealing with children. Think of the lives that could be saved and brain damaged that could be prevented.

We don’t know what the future looks like for Jackson. Will he be able to participate in sports? Will he have have learning disabilities? Will he have seizures again? What will we do if the diazoxide side effects occur? Mostly I wonder if he’ll look back on his childhood and see all of the great things that happened or will he just remember being sick, poked, having to take medicine, and laying in hospital beds. As his parents I wonder if we’ll ever stop this constant worry, will we ever sleep more than a few hours at a time, and can I ever stop reliving all of the missed signs? Will the guilt ever go away so I can fully enjoy all of the moments we are so incredibly blessed to have? I’m hopeful they will and these first few months after the diagnosis fade into distant memories as milestones are met and new memories are made. How I look forward to that day!