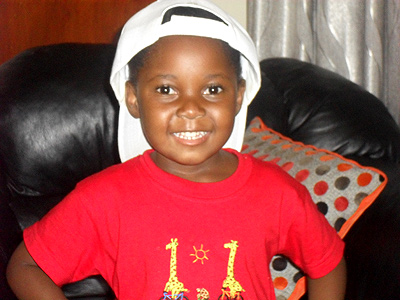 My name is Prosper and I am happily married and live in Zimbabwe in the capital city of Harare. I am mother to Michelle who is about to turn 5 years old on the 9th of August. She was diagnosed with hyperinsulinism a few weeks after birth and had to undergo 2 subtotal pancreatectomies after all drugs had failed to prevent the hypoglycemia episodes. Now she is diabetic and on insulin injections twice a day.

Michelle was born a seemingly healthy big bouncy baby girl at full term weighing 3.6kg by C-section. The C-section was due to the fact that she did not turn to face down during the last weeks of pregnancy. I remember the midwife saying it was a blessing in disguise because she would not have survived labor with her low blood sugar levels. A few hours after birth, she let out this sharp sudden cry and was only temporarily consoled by formula. She would often cry afterwards for longer periods during her first night. An alert nurse noticed her paleness and that she was no longer breathing properly on her first night. They took her to the neonatal unit and placed her in a ventilated incubator. The pediatrician came the next morning and performed a battery of tests (including spinal tap) except for blood glucose test. From then on and the coming days she would have seizures about 5 times a day but they still did not know what caused them. On the 3rd day they conducted a blood glucose test and got the reading 1.9mmol/l (34 mg/dl). They put her in the ICU on a dextrose drip, however, the blood glucose level never rose impressively. She was mantained on this infusion and was also fed formula
every 3 hours with added glucose through a naso-gastric tube (NG tube). Glucometer readings were taken every hour through a heel prick.

A few days in the ICU my husband overheard my daughter’s doctor discussing the case with a doctor colleague from Ghana. The colleague seemed to be suspecting hyperinsulinism. My husband quickly started conducting his own research on the internet , looking for similar cases and treatment regimen that had been implemented. After about 2 weeks of researching, my husband assisting the doctor, they started to give her steroids and that helped a lot. The only down side was that she would get frequent infections and gained weight very fast. We also tried different drugs such as glucagon, nefidepine, diazoxide but they did not work at all. The last option was surgery. At 6 weeks they performed her first sub-total pancreatectomy and it seemed to have been a success. However 2 days post surgery her blood glucose levels fell again. They added glucose powder with every milk feed in the ward and once she stabilised we were sent home. The glucose in milk feeds worked at first however as the weeks went by she required more and more glucose to mantain normal blood sugar levels. Everyone had to take turns to feed her by NG tube round the clock including my husband, father-in-law, mother-in-law, sister- in-law and young sister. Michelle also didn’t like the NG tube and she sometimes would pull it out. We would have to drive very fast to the emergency rooms to have another one reinserted . We went back to her pediatrician when she was about 5 months old and he had no option but to call for a second operation as she was now feeding by NG tube every hour, 24hrs a day. This was unsustainable. Also due to the excess glucose intake she was now an obese baby weighing 15kg (33 pounds) at 5months.

The second operation was at 6 months. After the operation she had to be on insulin and pancreatic enzymes. She continues being on insulin. We have since stopped the enzymes as they are not available in Zimbabwe. Each time we had to import them. She is growing well and gaining weight well. However due to the numerous episodes of hypoglycemia she experienced delayed milestones. We had to teach her how to drink milk with her mouth because she had been so used to the NG tube. A physiotherapist also had to teach her how to crawl. She now seems to be catching up and is now in pre-school. It was a very difficult time for us as new parents. It was also very difficult because the doctors here had never seen this condition. She spent a lot of time with low blood glucose levels with us not knowing what to do. If we and the health personnel new in time we would have reacted in time. The economic situation was very bad at that time. There were no drugs in Zimbabwe. Each time we had to ask relatives to send the drugs and this delayed us some more. She would continue having the seizures and all the nurses would do was watch and record the length of time under which she was twitching. We thank God for this miraculous journey.