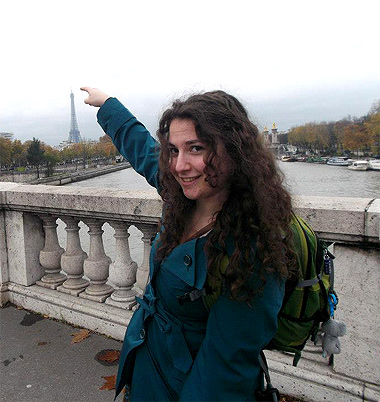 My name is Rianna, not Hyperinsulinism. When I say the phrase “childhood illness,” what image comes to mind? It is probably not a picture of a girl who volunteers, hikes in her free time, and even participates in internships. If I am right, the picture is not of me. I am more than a rare disease. I hate the fact that when some people hear about my past, they picture a medical condition; they do not see a person who, by the way, happens to have a confused pancreas. Although I am not defined by my disease, it has helped me develop as a person. Hyperinsulinism basically means that my pancreas’s insulin cells secrete insulin at will, or not at all, depending on…well, nothing. It is a chronic disorder that I’ve had to deal with all my life. Hyperinsulinism has placed many hurdles in my path. I have simply learned to jump higher.

My life has been one obstacle after another. The first three years of my life I was in and out of the hospital as an inpatient on a regular basis. As a baby, I had 3 surgeries: a pancreatectomy, a gastrostomy-tube insertion, and an atrial-septum defect repair. When I was 6 weeks old, I had ninety-eight percent of my pancreas removed so that I would stop becoming so severely hypoglycemic. At fifteen months, since I was still dangerously hypoglycemic, I had a gastrostomy-tube inserted so that I could receive a bolus of complex carbohydrates to maintain my blood sugar levels throughout the afternoon and a basal of complex carbohydrates throughout the night. I had my atrial septum defect, or ASD, repair when I was two and half years old. Although the defect itself had nothing to do with my plummeting glucose levels, the recovery as well as the preparation for surgery caused me to have to be inpatient for weeks. At nine years old, I finally got my gastrostomy tube removed, but then had to go back into the hospital to get the hole closed because it was not healing properly and so my stomach acid was eating away at my stomach, muscle and skin.

Aside from surgical reasons, every time I was sick, or even had a cold, my appetite would go down and I would wind up in the hospital. Not only because my blood sugar levels would go down, because of my lack of eating, but also because being sick caused my blood glucose levels to become somewhat erratic. Couple sickness with annual blood testing that needed twenty-four hour fasting before hand, which meant that I would have to be admitted into the hospital a week before to ensure my blood sugar levels would be maintained, meant that I was constantly being admitted. Until the time I was 12, I had home-care nurses that were with me for most of the day and well into the evening. They were constantly monitoring me, and adjusting my meals in an attempt to regulate my blood glucose levels.

The fact that my disease is so rare has helped me develop many attributes that I am proud of. For example, it has forced me to become self-sufficient in ways that most teens do not have to be. It has enhanced qualities in me such as understanding and leadership. In fact, in tenth grade, I was chosen for the honor of participating in the HOBY Leadership program. The program taught me how to be a dominant yet compassionate member of a team.

Furthermore, it is not only my medical condition directly that has influenced me, but what it has let me do and see while at the hospital. For example, everyone hates the idea of going to the pediatric wing, expecting to see depressed little kids, crying over what is becoming of their lives. That may be the farthest thing from the truth. Actually, I look forward to volunteering in the Child Life room while I am being treated. I find it very inspirational. Most, if not all, of the children that I have met in there are happy and playful. They just want to live their lives and do not let their conditions impede them if it can be helped. They laugh, play, and smile, just like any other child, but they happen to have to take medication or get help from a nurse to do some commonplace activities. Their medical hardships, in my opinion, have even made them more mature in some ways.

Having hyperinsulinism has opened my eyes to many experiences that I would not have otherwise had the opportunity to come across. Although it is true that I am not solely defined by my disorder, I will admit that it has shaped me and given me many attributes, such as independence and strength—something that I value beyond any other trait. It always perplexes me how when people think of a disorder or illness, they only see the negative. People should try to see the positive, because even though it isn’t always apparent, there is often a lot of it to see.