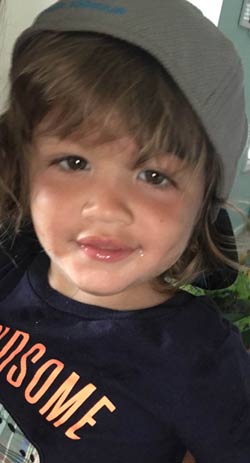 This is my sugar baby Dallas.

He was born Dec 9, 2014. He is 21 months old and such a sweet, funny, loving boy. He was born at 39 weeks, uncomplicated pregnancy, vaginal delivery with no issues. He is my third child and the baby of the family since my older two children were 8 and 10 when he was born.

Dallas had a normal hospital stay at birth, with no issues or concerns. He was different than my other babies right off. He was extremely fussy, spit constantly, and had some leg tremors that his pediatrician said were due to an immature neurologic system. I related his fussiness and spitting to being breastfeed and possibly having a lactose intolerance so I cut dairy out of my diet until about 4 months. He was always below the 10th percentile for his weight despite my milk production, was pale and mottled but seemed to develop appropriately and the doctors never had concerns. He had one ear infection around 6 months and an unknown cause of Salmonella around 10 months.

In November, I stopped breastfeeding at 11 months and was given the ok to transition him to whole milk since he was about 3 weeks away from turning 1. About a week after I stopped breastfeeding, Dallas woke up with very abnormal behavior. He was disoriented, screaming, had poor tone, especially with holding his head up, and was involuntarily jerking on his left side. As a RN who works in the NICU, I immediately knew he was having a seizure and called his Dad who worked 20 minutes away. In the meantime, I gave Dallas a cup milk, he dozed off, and when he woke up after a 15 min catnap, he was normal. I called the pediatrician and was seen later that day where they checked his ears and temp, and told me if it happens again to let them know but he may have woken up in a half dream state where he was having a night terror to explain his behavior that morning.

In the next few weeks, Dallas seemed to be a little different. He had just started walking and although new walkers fall a lot, I noticed Dallas would go from walking to collapsing flat on his back. He was also sleeping a lot more often and seemed even after naps as though he had never rested, wanting to be held a lot more.

I would say his next episode was about 2 weeks later, where he seemed to have another disoriented spell, and loss of tone where he could not hold his head up. As a nurse and a mom, I knew something was not right but my husband insisted I diagnosed everyone and that Dallas was just sleepy.

At his one year appointment in December, I told the NP what he was doing and she agreed he was probably having some sort of seizure so we were referred to Neuro but could not get in until 4 months later in March. I had done research on head-dropping seizures and different types, trying to figure out what it could possibly be. Dallas had only ever had the involuntary jerking/twitching that first time so there wasn’t much of a trend or consistency. He had several other episodes in December, getting more frequent (once a week or so) but was on a call list to get into Neuro sooner if they had an opening.

It was finally his episode on January 18th that sent off my red flag and my NICU nursing kicked in and also finally caught the attention of my husband. Dallas woke up from a nap, very disoriented, couldn’t hold his head up, he was whining, his pupils were dilated and his heart was racing. I video recorded it on my cell phone so I could show the doctor what he was doing when I realized after about 15 minutes, that a seizure should never last that long.

I sat him down while I poured his juice and he fell over, with his hands just a jittering. He drank his juice cup quickly and within 3-5 minutes his symptoms had completely resolved. It suddenly hit me like a ton of bricks, “OH MY GOD, he is having low blood sugar spells!”

I immediately contacted my friend who had gestational diabetes during pregnancy who had to check her blood sugar and asked to borrow her glucometer.

When I checked him the next day without symptoms, his sugar was 42. I immediately texted the Neonatologist I worked with and he said, for him, he needs to be above 70. Take him to the ER, something is wrong. Despite 8 oz of milk and 6 oz of juice before being seen in the ER, his sugar was 56 when they checked him.

We were then transferred to a bigger hospital where he could be evaluated by a Pediatric Endocrinologist. Within hours of being admitted to the Peds unit, Dallas went into an episode where his sugar got down to 32. They did critical panic labs to pinpoint the cause and in the meantime, had to give glucagon where he slowly increased his sugar in the 60’s before starting to decrease again. At one point within that hour, he was on the highest dose of Dextrose fluids through his IV and we were sent to the PICU.

Long story short, we were in the PICU 5 days on IV dextrose before his labs came back. He had an MRI on his abdomen to rule out an insulinoma which was normal. The only abnormal lab was his insulin level, thus diagnosing him with Hyperinsulinemia.

The genetic screen was sent off and also came back normal. They started him on Diazoxide and thank god he responded to it. He passed his fasting period of 8 hrs and after a few stable days, was sent home with instructions to check his sugar three times daily before his dosages are due. He also has a kit we carry with icing and a glucagon kit. He has had three follow-ups with Endocrine since his discharge and our questions are unanswered.

His diagnosis of “Diazoxide-responsive HI” basically means they do not know why. We have no family history, none of the other children have issues, so why Dallas? The medication gives him some tachycardia as well as swelling around his eyes, and of course the excessive hair growth which we have been brave enough to manage with Nair for sensitive skin.

His sugars have been stable (90’s average) and is still on the same dose he was discharged on. He is doing well and seems to be developing appropriately, which was my biggest fear since we were unsure how long he went being hypoglycemic.

The doctors commended me in accidentally diagnosing him and all agreed if I had not been in the medical field, Dallas may have not woken up one morning or could have severe brain impairments.

I will never have some of my answers… Why did it present at 11 months? Especially a week after I stopped nursing? Could it be my breastmilk and body was compensating for him? How did I miss it for so long? What is causing this? Will his organs be affected by this hardcore medication after chronic use? Will he grow up normally and play sports like everyone else? How will he do in school, what if he has an episode?

I hope to spread awareness to the community so these signs and symptoms are not ignored or misdiagnosed. How many SIDS cases could really be undiagnosed HI? I hope my story helps others and having this community of HI to raise awareness gives me security in knowing one day we will have more answers.