Natural History Repeats Itself: My journey promoting and participating in natural history studies

When I first heard the words “natural history study,” the only thing that came to mind was the Museum of Natural History – and I had no idea if the two “natural histories” were related in any way. Now, I understand why the museum got it’s name.

A natural history is a study that follows a group of people over time who have, or are at risk of developing, a specific medical condition or disease. The museum, similarly, is an observation of the natural course of events in the animal kingdom – evolution, extinction and everything in between.

For the last couple of years, one of my biggest priorities working for CHI has been creating awareness through social media of the HI Global Registry – the first patient-powered research project that aims to become a natural history of congenital hyperinsulinism.

I traveled from Brooklyn, NY to the National Institute of Health (NIH) in Bethesda, Maryland to participate in the RUNX1 mutation natural history study. 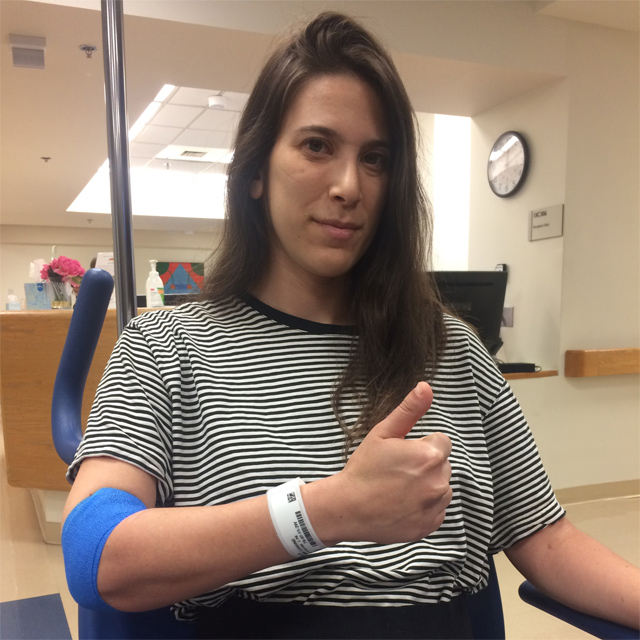 “Don’t worry, all of your information will be de-identified,” said my research physician at the NIH, reassuring me that my medical information would not be attached to my name; this was exactly the same language I had used when I helped craft messages about the HI Global Registry for the CHI community earlier that week. She continued, “This is a natural history study, which means it is purely observational. We aren’t able to guarantee any treatments at this time, but your participation is so valuable because the more people participate, the more we will be able to recognize patterns.”

Sound familiar? (If you follow CHI on social media, it should!)

First, a little background on why I began working in the rare disease space in the first place: my dad was diagnosed with a rare blood cancer, MDS, or myelodysplastic syndrome, in 2013. After he died, just short of a year later, from complications of a bone marrow transplant, I became determined to raise awareness of MDS, and do something positive for the rare disease community. I started a position at the MDS Foundation as social media manager, and on Rare Disease Day 2015, I met Julie and was introduced to the world of hyperinsulinism.

Little did I know it, I had a rare disease myself.

It’s so rare it doesn’t really even have a name, but if you had to call it something, it would be thrombocytopenia with a functional platelet granule storage pool deficiency – I also recently found out I have RUNX1 and BCOR mutations, which are both associated with the type of blood cancer (MDS and Leukemia) that my dad and grandmother had. Apparently researchers are trying to understand the correlation between low platelets/functional platelet disorders and this type of genetic mutation.

So, when my hematologist informed me about this natural history study, (a term I now more than recognized) taking place at the NIH, I knew it was the right thing to do to join it – not to mention, I would be a hypocrite if I didn’t participate, wouldn’t I?

The whole process made me gain a greater understanding of the importance of a natural history study. The doctors, researchers and nurses were all so warm and appreciative of my participation. Talking to them and getting to know them better made me see how truly valuable my participation was – and gave me a greater appreciation for the HI Global Registry. It is no easy feat to start a rare disease registry, and it is no simple task interesting people in a study leading to their participation in a patient registry. I am 1 of around 100 people worldwide who have been identified with a RUNX1 mutation invited to participate in this study (makes me pretty special, don’t ya think?).

The HI Global Registry, in its very first year of existence, already has over 250 participants. HIGR consists of 13 online surveys. It does take a big effort to complete all the surveys, and yes, for some, it may seem tedious, but it does not require anyone to relocate for additional testing, take days out of their busy lives, and have a painful bone marrow biopsy … for those who are unfamiliar with the process, it’s basically a giant syringe-straw that breaks through a little bit of my hip bone and suctions out the bone marrow. It leaves you feeling like you were kicked in the back, really, really hard. I would say most of the pain lasts about a week, but I was sore for a long time afterwards. I had to do all of the testing described above for the RUNX1 study.

But even through all the inconvenience and discomfort, I felt so good at the end of trip. I had always wanted to be able to donate bone marrow to help those like my Dad – but I never could because of my low platelets. By participating in this study I am able to give back in another way, which will hopefully contribute to future generations of daughters not having to lose their fathers at such a young age.

As a member of the Jewish faith, I consider this kind of thing – giving to future generations in the name of science – a mitzvah; an act of kindness, a good deed, a duty. I believe it is our moral responsibility to do what we can while we can for something bigger than ourselves, and I’m incredibly grateful I had the opportunity to participate in a study and to work to increase participation in the HI Global Registry.